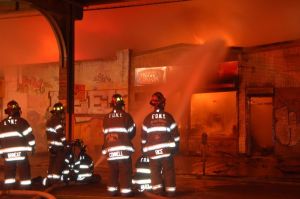 BROOKLYN THIRD ALARM TEARS THROUGH ROW OF STORES
By Bill Tompkins – http://www.btfirephotos.com/
Several stores were destroyed on Sunday January 31st, when flames consumed them in an early morning fire. FDNY units in Brooklyn were dispatched at about 1:00 AM to Kings Highway and Mc Donald Ave. for a report of a store fire. A second alarm was transmitted as units arrived to find heavy fire from a hardware store on the McDonald side of the building. Within minutes of arrival the decision was made to go defensive as the flames broke through the roof and numerous explosions were heard from the structure. The fire quickly spread to an attached grocery store and to the roof area of a bank. Three tower ladders were put in operation. One worked from sidewalk level in front of the structure due to the elevated subway tracks above. One was set up in a parking lot on the “D” side and another operated from the Kings Hwy. side. Several handlines were also operated. The fire was able to be placed under control in about three hours, after a third alarm for relief was called for. Subway traffic, which was shut down due to the fire, was able to resume. The sanitation department was also called due to the iced over streets. The cause is under investigation.