No break from fire-fueling winds until Thursday, FEMA official says 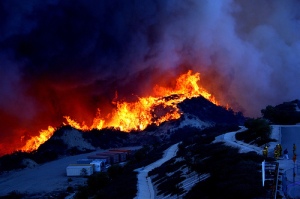 Firefighters battle a wildfire in the Del Dios area of Escondido, California. More than half a million people were ordered to evacuate across California on Tuesday as wildfires raged for a third day, razing over 1,000 homes and threatening to overwhelm weary firefighters.(AFP/Getty Images/Sandy Huffaker)

Southern California Fire Report – YOUR SOURCE FOR THE MOST CURRENT INFO